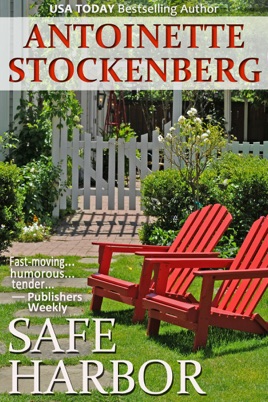 SAFE HARBOR... That's what Martha's Vineyard has always been for Holly Anderson, folk artist, dreamer and eternal optimist. If she could just save enough to buy the house and barn she's renting, fall in love, marry the guy and then have children as sweet as her nieces, life would be pretty much perfect.

Poor Holly. She has a lot to learn.

Havoc arrives on the island in the guise of stunningly beautiful Eden Walker, a gold-digging con woman who's already stolen the nest egg of an elderly couple and who promptly seduces Holly's sixty-something father while she's in hiding. Holly's mother is devastated, her sister won't deal with it, and Sam Steadman--son of the now impoverished couple and a man who has more than one reason to hunt Eden down -- is furious. After a bumpy start, Sam and an equally outraged Holly join forces to track down the elusive Eden and reclaim both treasure and father. But hearts and minds collide, and shipwrecked emotions are strewn along the way. Will Holly and Sam ever be able to trust one another after the not-so-merry chase?

"Ms. Stockenberg is a master of relationships .... This book is fresh and exciting ... a fast-paced novel that will leave you feeling so darn good ... brava!"
--Belles and Beaux of Romance

"SAFE HARBOR is a most entertaining contemporary romance. It has great characters, a satisfying love story, and just enough suspense to keep the story moving. It also has a delightfully drawn setting as the author brings Martha's Vineyard to life .... This woman can write."
--The Romance Reader

"Another notch in a collection of compelling dramas ... this author really knows how to tell a story!"
--Romantic Times

"A story about people, relationships, situations, loss of innocence and the good and evil that exist in each. Slashing dialogue ... characters who are so human and flawed that you know you've met them -- and known them -- somewhere before. A fabulous, fabulous read."
--Old Book Barn Gazette

"A perfect summer novel ... a hot read with all the right ingredients: passion, humor, suspense, murder, greed, and all of it set in Martha's Vineyard! What could be better?"
--Pam Johnson, online reviewer

Antoinette Stockenberg
By the Sea Part One: Tess
4.0 of 59

Antoinette Stockenberg
A Charmed Place
4.5 of 28

Antoinette Stockenberg
The Complete By The Sea Series Boxed Set
4.0 of 25

Antoinette Stockenberg
A Month at the Shore
4.0 of 34